Combining improvisation with sculpture, sound, and lights, M _ _ _ ER taps into the tangled relationships we have with familiar people and things to examine the shifting dynamics of intimacy... More

Combining improvisation with sculpture, sound, and lights, M _ _ _ ER taps into the tangled relationships we have with familiar people and things to examine the shifting dynamics of intimacy between audience members' senses of self, others, and objects. The title suggests various interpretations of its missing letters; the performance itself addresses ideas such as “mother,” “murder,” and “matter,” while still leaving room for ambiguity. M _ _ _ ER is a nonlinear, scenic examination of entanglements, from mothers to matter. Investigating relationships that are common to almost everyone, the performance probes the precarity inherent to physical proximity or emotional closeness.

Using her training as an improviser and the inexhaustible possibilities each audience member brings, Knight’s work regularly puts Black femmes—often herself—in contested and confrontational positions of power. Knight guides her audiences through indeterminate situations that illuminate the relationships at play in performance and in our everyday lives. The controlled chaos of these mysterious group interactions provokes laughter and occasional discomfort, using irrationality to make meaning out of our contemporary culture.

This project is organized by Tara Aisha Willis; Curator, Performance and Public Practice; with Laura Paige Kyber, Curatorial Assistant. The livestreamed performance is coproduced by On the Boards, contemporary performance center, Seattle, Washington.

Autumn Knight is an interdisciplinary artist working with performance, installation, video, and text. Drawing from her training in theatre and the psychology of group dynamics, Knight makes performances that reshape our perceptions of authority figures, power dynamics, and audience expectations of live experiences.

Her first solo museum exhibition was at Krannert Art Museum, Illinois, in 2017, titled Autumn Knight: In Rehearsal. Her work has been presented at various institutions including The Institute for Contemporary Art (VCU), Richmond, Virginia; Human Resources, Los Angeles; and Akademie der Kunste, Berlin, Portland Institute for Contemporary Art; Project Row Houses, Houston; Kelly-Strayhorn Theatre, Pittsburgh; and the Crystal Bridges Museum in Bentonville, Arkansas. Her performance and video work are held in the permanent collection of the Studio Museum in Harlem. Knight participated in the 2019 Whitney Biennial as a performance and video artist.

Knight attended Skowhegan School of Painting and Sculpture (2016), and completed an MA in Drama Therapy from New York University (2010) and a BA in Theatre Arts and Speech Communications at Dillard University in New Orleans (2003).

Her recent performance at On the Boards, Autumn Knight: M _ _ _ ER was a National Performance Network Creation & Development Fund Project, which was co-commissioned by DiverseWorks, Houston; On the Boards, Seattle; and Women & Their Work, Austin. M _ _ _ ER premiered at DiverseWorks in October 2018; M _ _ _ ER was created with additional commissioning support from Abrons Arts Center for the work’s New York premiere in 2021.

A selection of her current work can be viewed on the artist’s website: autumnjoknight.com 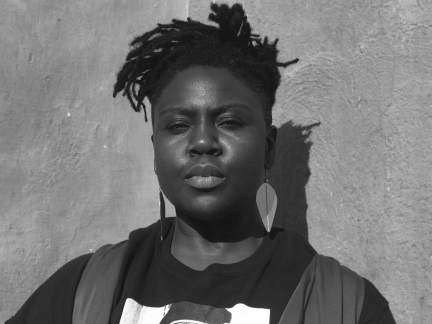