Paradisiacal Rites is the realization and completion of the “Aesthetic Declarations” Transports of Delirium: Aesthetic Ascesis in 4 Acts. Conceived, written, and directed by Derrick Ryan Claude... More

Paradisiacal Rites is the realization and completion of the “Aesthetic Declarations” Transports of Delirium: Aesthetic Ascesis in 4 Acts. Conceived, written, and directed by Derrick Ryan Claude Mitchell. These Aesthetic Declarations showcased elements of ballet, symphony, installation, modern dance, ritual, site specific installation, and experimental theatrical performance. Transports of Delirium was created as the foundation for Paradisiacal Rites, a large-scale site and time specific, operatic performance that is scheduled to have its world premiere at The Donau Festival (Krems Austria April 2013) its United States Premiere at On The Boards (Seattle, WA in May of 2013), before partnering with Luminato or the remounted Canadian Premiere in June of 2014.

Currently exploring source material that includes: the Manson Trials, the final moments in Jonestown Guyana, music from The People's Temple Choir,  the Oscars, perceptions of mental illness, elastic moral codes, as well as the poetic idea of Jean Genet's negative ascension to the realm of "The Saint" as described in Sartre' book, Saint Genet, and the 4 pieces that made up Transports of Delirium, Paradisiacal Rites provides a lens to explore and distill concepts of Narrative Truth and Poetic Truth, Hysteria, heightened physical and psychological states, in both real and dramatic time; themes that are universal, visceral and dense. Paradisiacal Rites will operate within a 3 Act structure with three major installations, a large gold kinetic wall, a wheat field with specific sections of brass wheat that move from a hidden motor, and two large reflective pools of honey and blood, revealing people hidden in couture costume pieces made entirely of flowers. Paradisiacal Rites will use the strict elements of ballet, juxtaposed with song and elements of body-based performance to reveal Poetic imagery that is always in a state of flux, peeling back a narrative that will be changing in the audiences mind long after the performance has ended.

For the U.S. premiere of Paradisiacal Rites at On The Boards Director Derrick Ryan Claude Mitchell also created a series of satellite pieces around the city of Seattle creating a 24 hour cycle of performance culminating each evening with a procession to On The Boards.

Derrick Ryan Claude Mitchell creates large-scale pieces that range from symphonies and experimental plays in abandoned buildings, to durational performances in museum reflecting pools, boxing matches in filthy alleyways, rooftop performances atop doomed domiciles, ether induced “madness opera”, grandiose architectural wakes, and sublime blood fueled social reckonings. His pieces are neither purely plays or performance art commodity; neither complete spectacle or didactic diatribe. They are works that are vanishing. Mitchell was co-founder and director of revolutionary theatre company Implied Violence , where he wrote, produced and directed 29 major pieces, and was awarded Robert Wilson’s prestigious Watermill Residency, as well as The Stranger Genius Award. His works have been seen nationally and internationally, including an exhibition at The Frye Art Museum, donaufestival,, The Guggenheim NYC: Works and Process Festival, The Luminato Festival, The Holland Festival, Wiener Festwochen. Mitchell co-curated The Frye Art Museum’s Moment Magnitude exhibition and is currently a guest professor at Die Angewandte in Vienna, where he creates experimental performance laboratories. His most recent works are a trilogy of 8 hour “Madness Opera” which have been produced at WUK (Vienna) and supported by Robert Wilson’s Watermill Center. 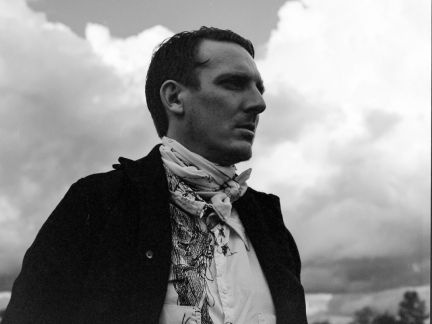 Saint Genet’s “Paradisiacal Rites” made its North American premier earlier this month at On the Boards after an acclaimed run at the Donaufest in Austria. It was brutal and it was beautiful, and the reactions have been predictably mixed, both in media and in conversations I have had since.

The Passion of Saint Genet Has Begun

It’s put up or shut up time for Saint Genet, their detractors, and their defenders. For years, company member Ryan Mitchell has said he wants to make a work not in a theater but on a city. Now is the time.

Paradise is gained and lost in the alternately beautiful and obscure “Paradisiacal Rites,” an often-overwhelming, exhausting performance work by the avant-garde company Saint Genet.

Nothing and Everything Is Sacred in Saint Genet’s ‘Paradisiacal Rites’

Warning: This performance art is not for the faint of heart.