Kristen Kosmas has had new works commissioned by The Chocolate Factory (NYC), Performance Space 122 (NYC), The Theatre of a Two-Headed Calf (NYC), Seattle University’s SITE Specific, Dixon Place (NYC), and the New City Theater in Seattle. Her plays and solo performances have been presented in Boston, Seattle, Chicago, and in Austin by the Fusebox Festival, Physical Plant, and Frontera at Hyde Park. In New York City her work has been seen at numerous venues including The Chocolate Factory, Prelude Festival, Performance Space 122, Dixon Place, Little Theater, Barbès, the Ontological/Hysteric Downstairs Series, and the Poetry Project. Her play Hello Failure was published by Ugly Duckling Presse; her multi-voice performance text This From Cloudland appears in the latest issue of “PLAY A Journal of Plays”; and her companion pieces Anthem and The Mayor of Baltimore, as well as her latest play, There There, were published by 53rd State Press. Other plays include Chapter of Accidents, H-O-R-S-E, and Palomino. Kristen is the writer/performer of four critically acclaimed solo shows: Blah Blah Fuckin Blah, Again, Slip, and The Scandal! As an actor, she has appeared in many notable new plays including Potatoes of August by Sibyl Kempson, Mark Smith by Kate Ryan, ASTRS and Some Things Cease To Be While Others Still Are by Karinne Keithley, The Internationalist by Anne Washburn, Producers of Fiction by Jim Strahs, The Florida Project by Tory Vazquez, and Hurricane by Erin Cressida Wilson. She is an Assistant Professor of Theatre at Whitman College and a member of New Dramatists in NYC.

"...Kosmas’ ferocious intensity, the cascading and looping of the language, the quiet underscoring hubbub of Russian, work a weird spell on you. And as Karen’s mask slips, and her own vulnerability and identification with a highly flawed, unsympathetic, 19th-century military man overlap with her private musings about love, death and guilt, Kosmas explores something deeper and more Chekhovian." – Seattle Times 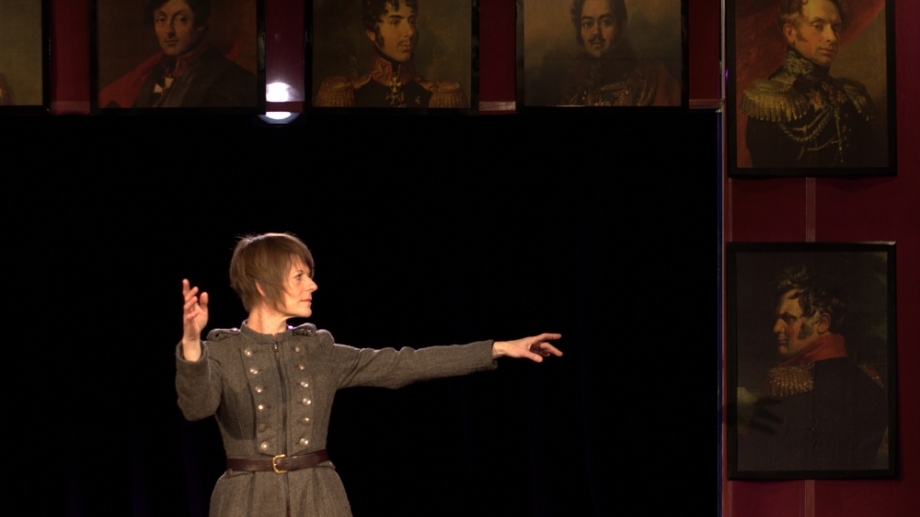