In 1960s Mexico, young revolutionaries took up arms in a desperate attempt to change society. A few decades later, the children of those guerilleros retrace the struggles of their elders, revealing... More

In 1960s Mexico, young revolutionaries took up arms in a desperate attempt to change society. A few decades later, the children of those guerilleros retrace the struggles of their elders, revealing this shadowed chapter of Mexican history through the personal experiences of one woman, Margarita Urías. El Rumor del Incendio blends witness accounts, archive film, and scale models as the actors unearth the artifacts of recent history. Nourished by the force of history, Lagartijas Tiradas al Sol has concocted a bold documentary play that reignites the political heritage of their ancestors. It is a blistering attack on our benumbed consciousness and a necessary plea not to forget the past.

Can a critical examination of the past transform the future? What was the world like for our fathers? What battles were fought before we were born? What is rebellion in the twenty-first century? How do we express dissent today? How do you build a better country? How do we reduce inequality? How do we politicize our lives? Can you change Mexico through armed struggle? If not, then how? Can we be revolutionary and institutional at the same time? How do we become engaged?

Are there other systems of society? Why are they so difficult to criticize? Should we invent another? Improve the one we have? Could a past mistake be a key to the future? How do we recover hope?

During the sixties and seventies, dozens of guerrilla groups formed in Mexico with notable political and ideological differences.

There comes a point where men and women not only wish for a better way of life, but find their current reality intolerable and then risk their own life in order to subvert it. What does it take for someone to risk their life when passivity is so easy, so natural? What drove these men and women to take up arms, leaving the comfort and inertia of everyday life in order to change society?

We are far from having a romantic or uncritical view on the armed movements. Nearly a thousand disappearances and an unknown number of deaths resulted from these movements. It is a story full of tears and contradictions, of innocence, but also of courage, bravery, and desire. Did some of this history contribute to a more democratic society? If other results were obtained, is it a failure to not achieve your intended goals? After all, Columbus arrived in America, though he set sail for India.

According to Walter Benjamin, “Marx says that revolutions are the locomotives of world history. But the situation may be quite different. Perhaps revolutions are not the train ride, but the human race grabbing for the emergency brake.”

And so, quite aware of the differences that separate us from the Mexico of the 60s and 70s, we still find ourselves immersed in deep troubles in a country where we have become insensitive to inequality and seem unable to create hopeful political projects. Outrage, resistance, protest, diversion, revolt, and insurrection are all routinely presented as things of the past. This project is an attempt to recover the idea of utopia and to imagine a more just world.

Lagartijas Tiradas al Sol is a Mexico City-based collective founded by Luisa Pardo and Gabino Rodríguez. Since 2003, the group has been developing multimedia performance projects that blur boundaries, dislocate, and disembowel what common practice fuses and obliterates.

They have produced nine large-scale projects that have received wide support throughout Mexico from dozens of festivals, the Mexican Ministry of Culture CONACULTA, the Federal University of Mexico (UNAM), and which have also toured throughout Mexico, to Kunstenfestivaldesarts in Brussels, Festival d’automne à Paris, Festival Transamérique in Montreal, Festival Escena Contemporánea in Madrid, and others. In 2011, they received the ZKB Förderpreis from Zürcher Theater Spektakel and the Audience Prize from the Impatience Festival at 104 and l’Odéon–Théâtre in Paris. 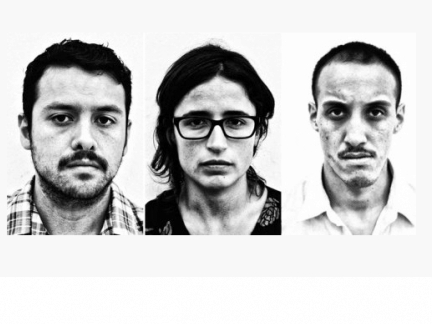 The Rumor of the Sun

“…a performance that had me questioning my own reality and how history is created.” – Flynn Center Blog