Known for its radical and reckless theatricality, avant-garde New York troupe Radiohole's newest work is a star-spangled American meta-melodrama inspired by film director Douglas Sirk's 1950s potboilers and Milton's epic Paradise Lost. Our heroine is an all-American "Eve" who must save her home from an evil-doer while struggling to find fulfillment in a lasting relationship with a supposedly good man who looks like god. Radiohole's newest synthesis of cultural flotsam is sure to be bawdy, silly, possibly transcendent, and a touch disturbed.

Radiohole was birthed in a Brooklyn basement in 1998 by Erin Douglass, Eric Dyer, Maggie Hoffman and Scott Halverson Gillette. The company has produced ten original shows that have been presented at venues around New York City including PS122, the Kitchen and the Collapsable Hole (sic) and have toured nationally and internationally. Radiohole’s Whatever, Heaven Allows was commissioned by PS122, The Walker Art Center and the Andy Warhol Museum through the Spaulding Gray Award. Whatever, Heaven Allows had its European premiere in April 2012 at Katapult Teater at Godsbanen in Ãrhus, Denmark. Over the years, Radiohole has earned a reputation as one of New York’s most tenacious and uncompromising ensembles. Radiohole is a recipient of the Spalding Gray Award, and has appeared at PS122 with Whatever Heaven Allows and Fluke. 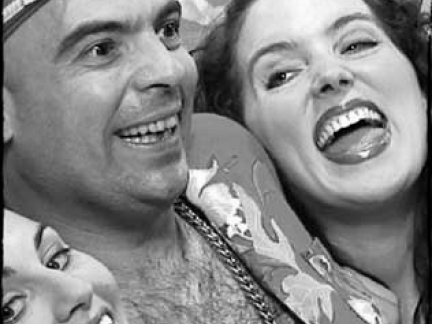 No reviews have been posted.